Some 2,000 years ago, merchants traversed grasslands and deserts and braved stormy waves using camel caravans and ships to conduct trade between the East and the West via the ancient Silk Road.

Such arduous experiences have been rendered obsolete today thanks to the burgeoning development of digital trade, which has brought the world to everyone's fingertips.

The total added value of the digital economy in 47 major countries around the world hit 38.1 trillion U.S. dollars in 2021, with the scale of China's digital economy hitting 7.1 trillion dollars, ranking second globally, according to a white paper on the global digital economy released in July by the China Academy of Information and Communications Technology. 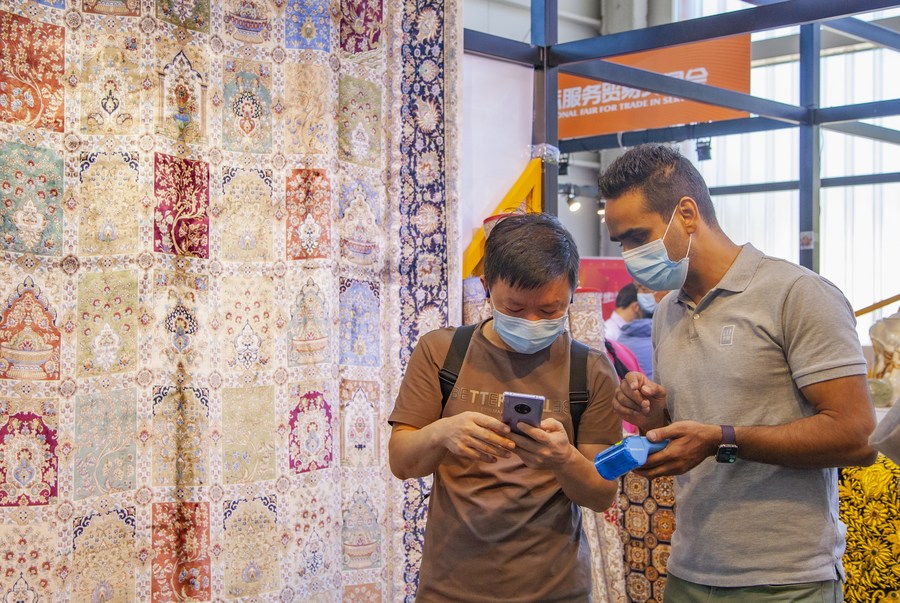 A visitor (L) uses e-payment services to make a purchase at the booth of Pakistan at the cultural and tourism services exhibition area of the 2022 China International Fair for Trade in Services (CIFTIS) in the Shougang Park in Beijing, capital of China, Sept. 5, 2022. (Xinhua/Zhang Fan)

Proposed by China in 2013, the Belt and Road Initiative (BRI) envisions trade and infrastructure networks connecting Asia with Europe and Africa along the ancient Silk Road routes.

Over the past 10 years or so, the BRI has followed the guiding principles of extensive consultation, joint contribution and shared benefits. It has made impressive headway in delivering tangible benefits to local residents through connectivity projects such as the Peljesac Bridge, the Mombasa-Nairobi Standard Gauge Railway in Africa and the new Haifa port in Israel, among others.

To keep up with the digital transformation trends, the Digital Silk Road was launched. It is the technology dimension of the BRI, which extends from the ocean floor to outer space enabling artificial intelligence, big data applications and other strategic internet solutions. 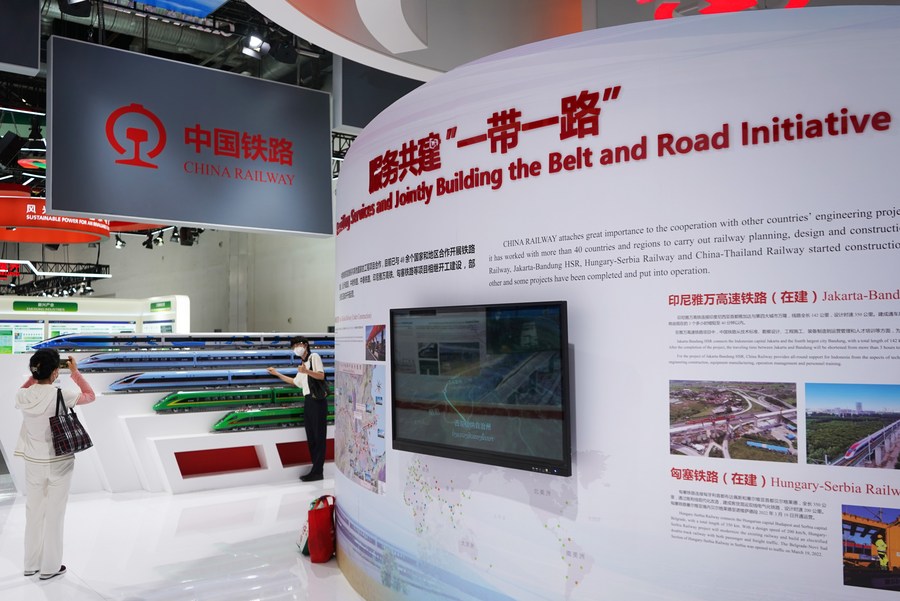 People visit the booth of China Railway at the China National Convention Center during the 2022 China International Fair for Trade in Services (CIFTIS) in Beijing, capital of China, Sept. 5, 2022. (Xinhua/Jin Haoyuan)

"However, it has also become a catalyst for businesses worldwide to significantly accelerate the supply of services through digital networks," Zhang said.

He noted that digitalization is fostering a new circle of innovation in services, which presents great opportunities for economic growth. "Global trade is constantly shaped and reshaped by technological innovations." 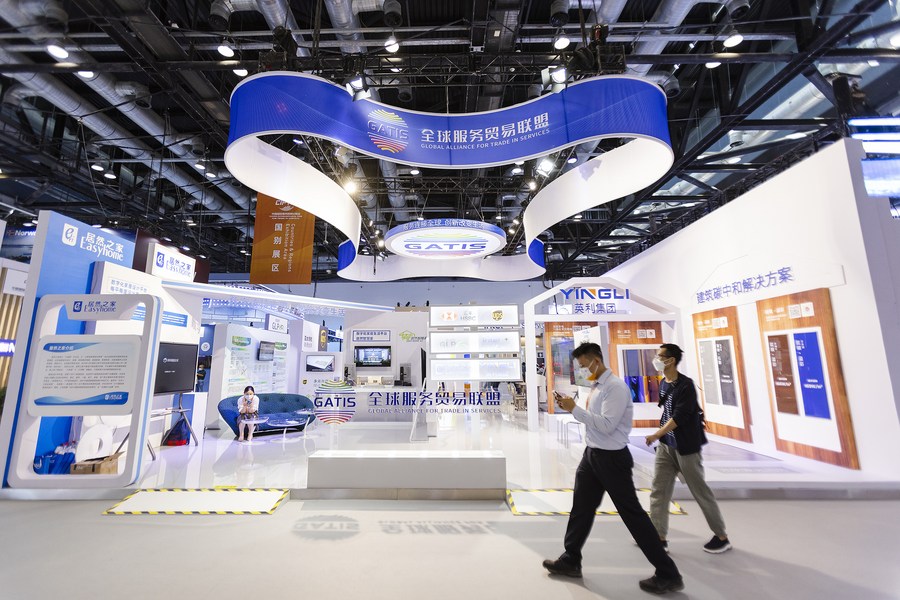 A report entitled "Digital Trade: Development and Cooperation," which was released at the CIFTIS, shows that the global cross-border trade in digital services exceeded 3.8 trillion U.S. dollars in 2021, accounting for 63.6 percent of the total trade in services.

China's digital trade has developed vigorously in recent years, with its total imports and exports of digital services growing 22.3 percent year on year in 2021 to reach 359.69 billion U.S. dollars.

"China's software information technology, BeiDou Navigation Satellite System, blockchain technology and many digital products and services, such as games, animation, film and television, have all been widely used among Belt and Road partner countries," Wang said. 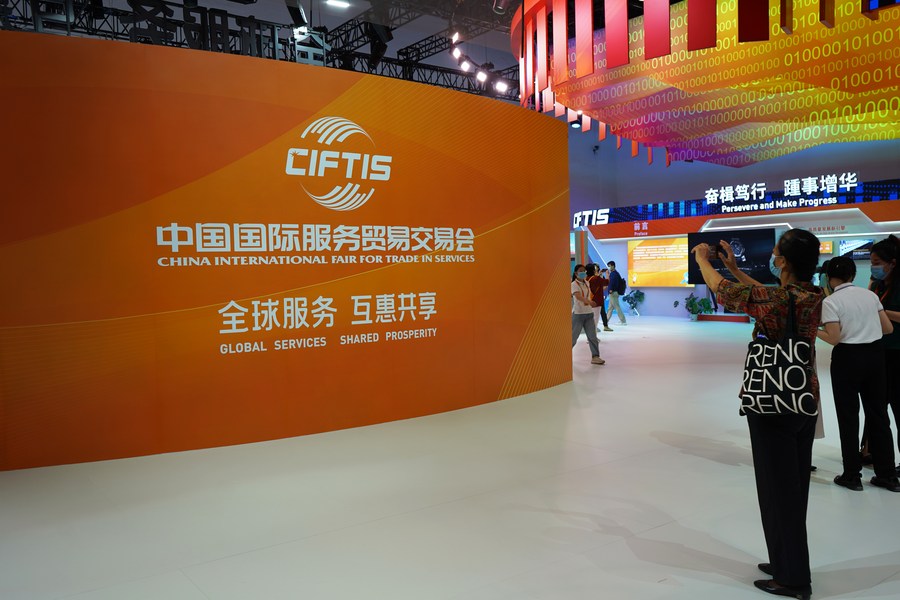 The dividend of China's booming digital trade has provided a pool of business opportunities and injected fresh momentum into Belt and Road partner countries, especially amid the COVID-19 epidemic.

In the Pakistan Pavilion of the CIFTIS, Aqeel Ahmed Chaudhry, head of WINZA, a Pakistani jewelry brand, spoke fluent Mandarin while introducing his jewelry to Chinese and foreign customers. The dazzling array of more than 100 pieces of jewelry has attracted many customers.

Chaudhry has run a store in Shanghai for three years and plans to open another one in the northeastern Chinese city of Shenyang in October. During this year's CIFTIS, he visited some shopping malls in Beijing.

He said he hopes to enjoy Beijing's preferential policies for foreign enterprises and open a new store in the Chinese capital next year.

"The COVID-19 epidemic has changed people's consumption habits, making online shopping more popular, especially among the young. As a businessman, I have to adapt to the latest trend," Chaudhry said, adding that negotiations concerning online sales of his brand on China's major e-commerce platforms JD.com and Tmall are underway. 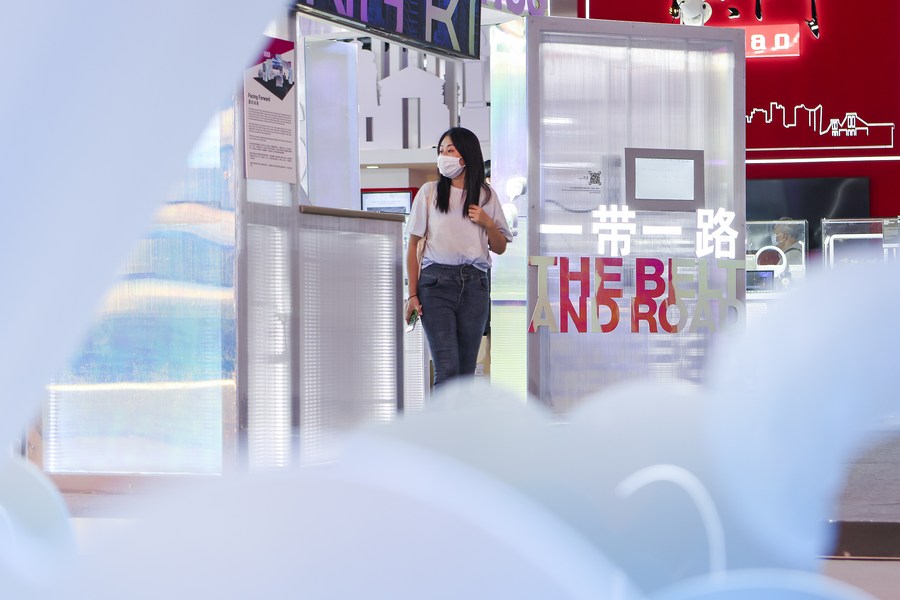 A woman visits an exhibition hall of the China National Convention Center during the 2022 China International Fair for Trade in Services (CIFTIS) in Beijing, capital of China, Sept. 5, 2022. (Xinhua/Hao Zhao)

"If enterprises can make better use of digital tools, they will become more efficient and competitive," he said.

"Sri Lanka dreams of a prosperous future tied up with digitalization," said K. K. Yoganaadan, deputy chief of the mission of the Embassy of Sri Lanka in Beijing, at the CIFTIS.

"We have introduced Alipay in Sri Lanka. Now the action is being taken to introduce WeChat Pay," he said. 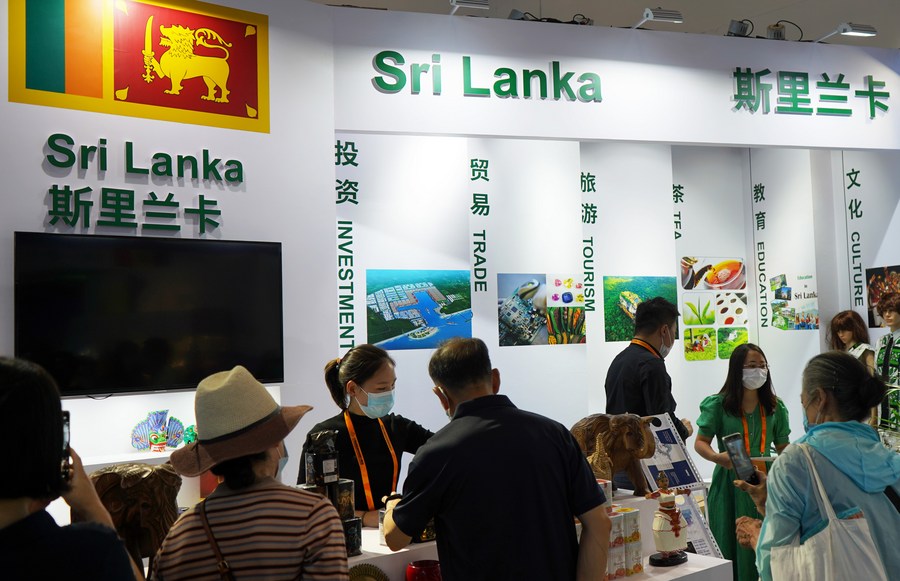 People visit the booth of Sri Lanka at an exhibition hall of the China National Convention Center during the 2022 China International Fair for Trade in Services (CIFTIS) in Beijing, capital of China, Sept. 5, 2022. (Xinhua/Jin Haoyuan)

Zhang Xiangchen, the WTO official, said that in the digital economy sector, developing countries have to overcome more challenges than developed ones, in areas including inadequate infrastructure, insufficient R&D investment, ineffective IPR protection, or absence of competition policy.

"Only through building an open business environment would it be possible to address these challenges," he said.

"As one of the world's largest traders and the key stakeholder in the multilateral trading system, China is naturally expected to contribute to the revitalization of the world trading system and help deliver credible results," Zhang added.