China, Greece to pool wisdom for community with shared future for mankind 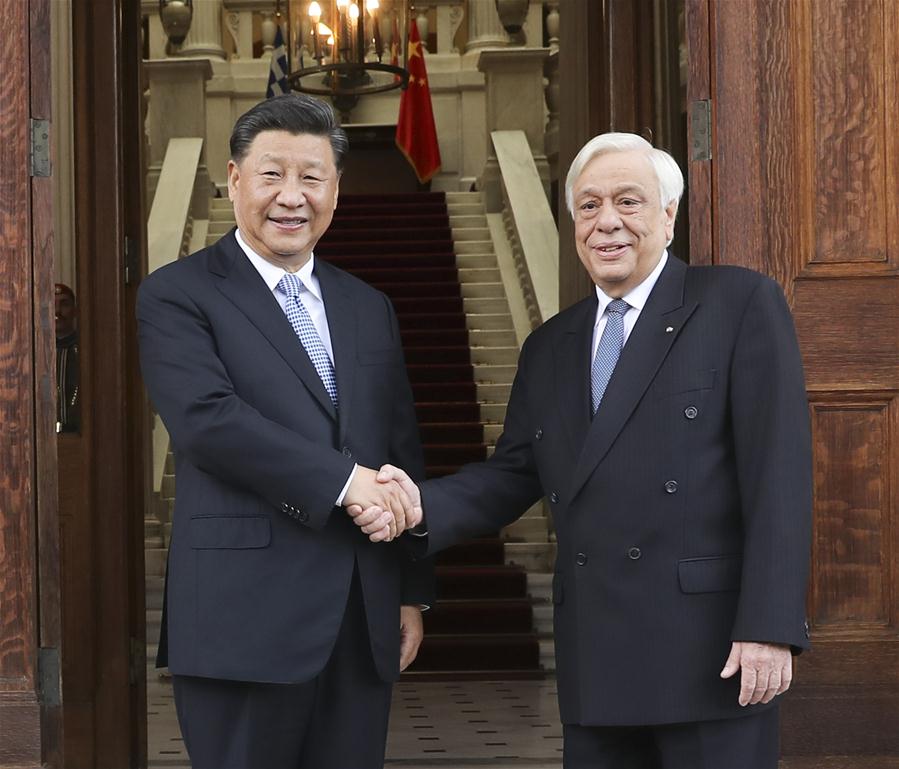 Chinese President Xi Jinping and his Greek counterpart, Prokopis Pavlopoulos, agreed here on Monday to contribute the wisdom of ancient Eastern and Western civilizations to building a community with a shared future for mankind.

To that end, the two presidents agreed during their meeting to consolidate political mutual trust, deepen practical cooperation and promote dialogue among civilizations.

Xi stressed that he came to Greece with respect for civilizations and expectations for the future.

"When drinking with a bosom friend, a thousand cups will still be too little," he said, quoting a Chinese proverb.

It is because, Xi said, as two countries with ancient civilizations, China and Greece share common or similar visions and have achieved national modernization and development through arduous struggles.

The world now has been going through profound changes unseen in a century, Xi said.

First, China and Greece should set an example of friendship, mutual trust, mutual benefits and win-win results, he said.

The two countries should step up exchanges at various levels, deepen political mutual trust and continue to firmly support each other on issues of their core interests and major concerns, he said.

He called on the two countries to jointly construct the Belt and Road and build China-Europe Land-Sea Express Line into an important thoroughfare for the transportation of goods and connectivity between China and Europe.

He also called on the two countries to step up communication in such areas as culture and Olympics, and facilitate people-to-people exchanges.

Second, the two countries should set an example that promotes China-Europe cooperation in an open and practical manner.

Third, the two countries should set an example of cultural exchanges and mutual learning among civilizations, Xi said.

Mankind should uphold and pursue noble sentiments, instead of egoism that advocates the pursuit of naked interests, Xi said.

The Chinese people have since ancient times believed in such visions as "Don't do unto others what you don't want others do unto you," "the world is for the public" and "harmonious and peaceful co-existence of various nations," Xi said.

China will never ever seek hegemony and does not agree to a you-win-I-lose zero-sum game, he said, explaining that the Chinese people have neither such genes in their culture nor such ambitions.

China's development has always been a contribution to the growth of the world's force for peace, Xi added.

Both China and Greece support dialogue and mutual learning among civilizations and oppose the fallacy of a clash of civilizations, Xi said, urging the two countries to keep giving play to their respective cultural advantages to hammer out a way for harmonious co-existence of various civilizations and peoples of various countries and offer more inspirations for world peace and human progress.

Fourth, China and Greece should set an example of coordination and cooperation in safeguarding multilateralism, Xi said.

He called on the two countries to strengthen coordination on major global and regional affairs, carry out closer cooperation within multilateral frameworks such as the United Nations, dedicate to the construction of an open world economy and jointly promote the building of a community with a shared future for mankind.

Pavlopoulos said the Greeks have a natural affinity for the Chinese because both Greece and China are countries with ancient civilizations.

Greece is delighted to see that the People's Republic of China has made remarkable achievements since its founding seven decades ago, he said.

Both Greece and China stand for the principles that different civilizations seek common ground while reserving differences, learn from each other, carry out communication and dialogue and co-exist peacefully, he said.

Greece is strongly against the so-called "clash of civilizations" theory, the president said, because civilizations in the true sense do not clash with one another and clashes do not solve any problem.

It is both absurd and harmful if a country makes its national policy based on the theory of "clash of civilizations."

China has made a forceful fightback against the theories of "clash of civilizations" and "a strong county is bound to seek hegemony" in light of its cultural tradition and the fact that it is now ever more open, advanced and developed, he said.

In a world full of uncertainties, China has offered very useful reference and plans for solving global issues by upholding peace, harmony and balance, he said.

Pavlopoulos said his country will continue to staunchly support China in safeguarding China's core interests, looks forward to strengthening cooperation with China in such areas as trade and economy and culture, and will actively participate in the joint construction of the Belt and Road.

He said he believes that Xi's visit will usher in a new era for Greece-China relations and lift the relations to a new height.

Greece is ready to join hands with China to promote the development of Europe-China relations, boost the cooperation between CEECs and China, and make joint contributions to promoting international fairness and justice as well as development and progress of mankind.

Prior to the meeting, Pavlopoulos hosted a grand welcome ceremony for Xi.

The Chinese president arrived in the Greek capital of Athens Sunday for a three-day state visit to the European country.