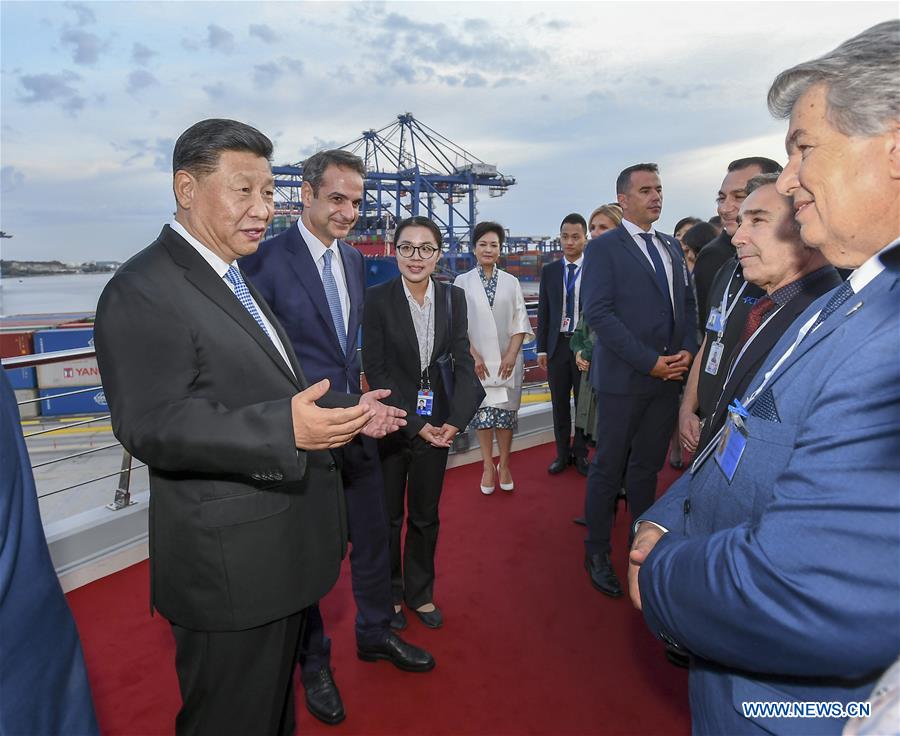 Chinese President Xi Jinping and Greek Prime Minister Kyriakos Mitsotakis on Monday visited the Piraeus Port, a flagship project in bilateral collaboration, and hailed it as a success under the Belt and Road cooperation.

In 2009, a subsidiary of China Ocean Shipping Company, also known as COSCO, started managing the Piraeus Port's container terminals. In 2016, COSCO acquired a majority stake in the port and formally took over its management and operation.

So far, the project has created jobs for over 10,000 local people directly and indirectly, and has built the Piraeus Port into the largest port in the Mediterranean region and one of the fastest growing container terminals in the world.

Upon their arrival, Xi and his wife Peng Liyuan, accompanied by the Greek prime minister and his wife, were warmly welcomed by Chinese and foreign employees waving national flags of the two countries.

Talking with Xi about their work and life, representatives of local staff extended heartfelt gratitude to COSCO for providing them with job opportunities in the most difficult times during the Greek debt crisis.

Thanks to the Chinese company, they now enjoy stable jobs and happy lives, the Greek employees told Xi.

With the Piraeus Port becoming an important fruit in jointly building the Belt and Road, the local staff said they feel very proud and have full confidence in the port's future.

Delighted to visit the port, Xi said that seeing is believing, and that he has seen here today that the China-proposed Belt and Road Initiative (BRI) was not a slogan or tale, but a successful practice and brilliant reality.

Noting that the BRI upholds the principle of extensive consultation, joint development and shared benefits, Xi said no one makes decisions for others, and instead all participants share responsibilities and benefits in BRI cooperation.

China, in its external exchanges, upholds the right approach to justice and interests, said the Chinese president, adding that he is delighted to know that COSCO's Piraeus Port project was able to help local people through hard times.

Xi called local workers important participants in and contributors to jointly building the Belt and Road as they have helped the Piraeus Port develop well, and wished them success at work and a happy life.

He urged the two sides to make continued efforts to further construct and develop the port, achieve the goal of making the port a regional logistics distribution center, and advance the building of the China-Europe Land-Sea Express Line.

Expressing his confidence in the unlimited prospects of the Piraeus Port, Xi said the cooperation fruits will continue to benefit the people of both countries and the region. He also conveyed his wish that the two countries will continuously make new achievements in their cooperation.

For his part, Mitsotakis underlined that China helped the Greek people when his country was embroiled in the debt crisis.

Facts have proved that the Piraeus Port project is mutually beneficial, and has strongly boosted the recovery of the Greek economy and social development, served the interests of Greece and its people, and received the support from the Greek people, he said.

From that the Greek side has come to a deep understanding of the true meaning of "friends," added the prime minister.

Greece is willing to join efforts with China to further expand and strengthen the Piraeus Port project and make it a paragon in the joint construction of the Belt and Road, Mitsotakis said.

Xi arrived in the Greek capital of Athens on Sunday for a three-day state visit to the European country.