Announcing the opening of the world's first import-themed national-level expo for the second year, President Xi Jinping on Tuesday called on all nations to prioritize the common good of humanity and outlined China's opening-up policies in the next step.

"Economic globalization represents the trend of history. Like the world's great rivers, the Yangtze, the Nile, the Amazon and the Danube -- they all surge forward in relentless flow, and nothing can stop their mighty movement," Xi said when addressing the opening ceremony of the second China International Import Expo (CIIE) in Shanghai.

"We must all put the common good of humanity first rather than place one's own interest above the common interest of all," he said.

In the speech, Xi presented a prospect of jointly building an open world economy through cooperation, with innovation and for mutual benefits.

"We need to 'join hands' with each other instead of 'letting go' of each other's hands. We need to 'tear down walls,' not to 'erect walls,'" Xi said. "We need to stand firm against protectionism and unilateralism. We need to continually bring down trade barriers, optimize global value and supply chains, and jointly foster market demand."

He called for joint efforts to uphold the core values and basic principles of the multilateral trading system, and promote trade and investment liberalization and facilitation. 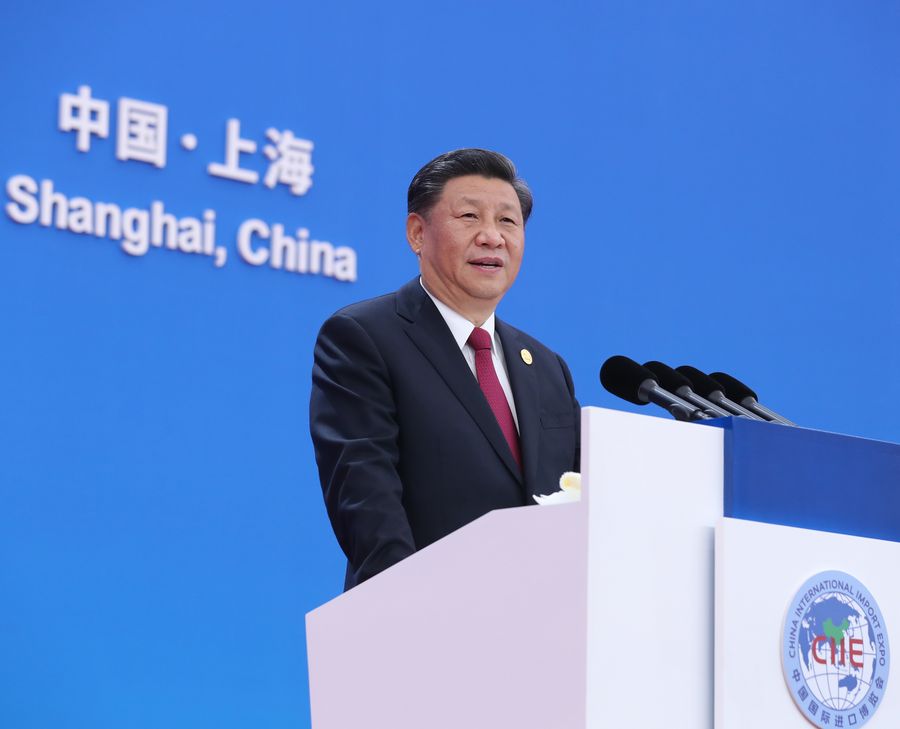 The CIIE, a brainchild of Xi, is flourishing with a larger scale and more enthusiastic participants this year. A total of 155 countries and regions as well as 26 international organizations are attending the expo under the theme of "New Era, Shared Future."

"President Xi has attended CIIE opening ceremonies and delivered keynote speeches for two consecutive years. It embodies the high degree of attention from Chinese government and demonstrates a firm determination for expanding opening and a good faith for attracting foreign investments," said Pascal Soriot, global CEO of AstraZeneca, a leading international pharmaceutical firm. "CIIE builds a first-class platform for the demonstration, marketing and collaboration of enterprises in various industries from all over the world." 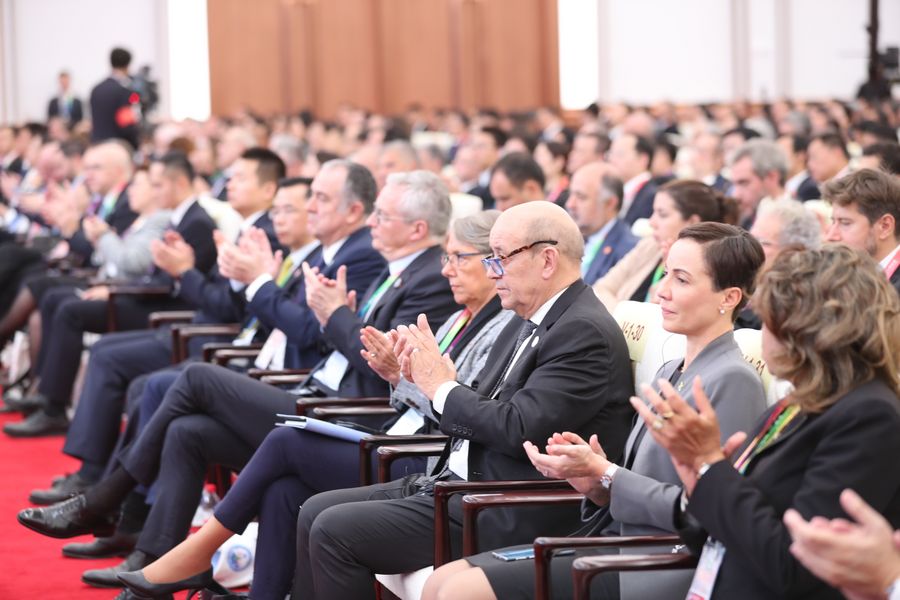 Despite the prolonged trade woe between China and the United States, a total of 192 U.S. enterprises have confirmed to attend the event, up 18 percent from the previous year. Those firms take up the largest exhibition area among all participating countries.

"We welcome President Xi's remarks at CIIE 2019 that reaffirmed China's commitment to policies that enable greater foreign investment by equalizing the market for foreign companies, greater intellectual property protection, and reforming regulations that will facilitate market access for many products," Mike Roman, chairman and CEO of 3M.

French firms, from luxury gaint LVMH to Air Liquide, also made a strong presence at the ongoing expo. French President Emmanuel Macron was one of the foreign leaders attending the opening ceremony, and France is one of the guest countries of honor. 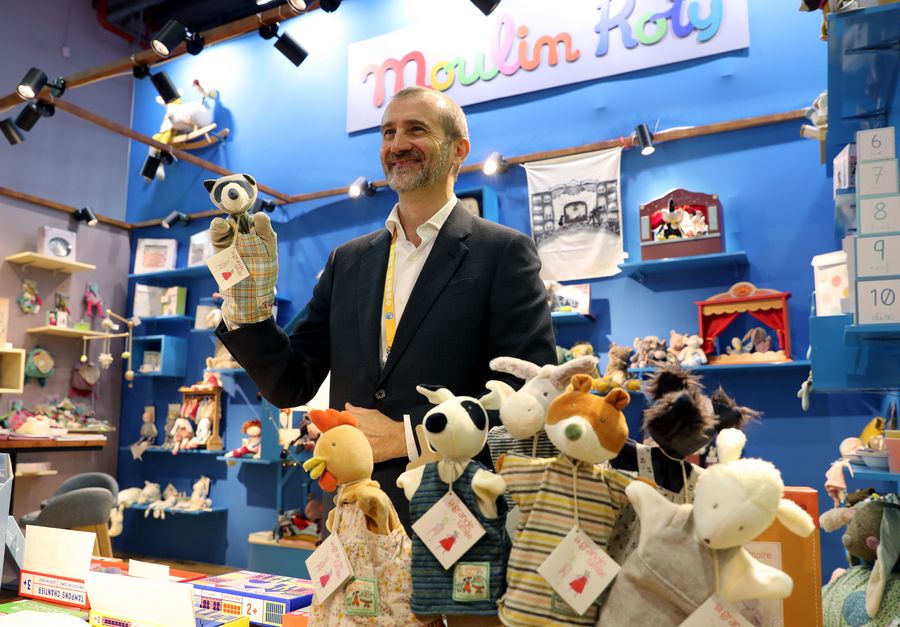 An exhibitor from France shows a toy at the Lifestyles exhibition area during the second China International Import Expo (CIIE) in Shanghai, east China, Nov. 5, 2019. The second CIIE kicked off Tuesday at the National Exhibition and Convention Center in Shanghai. (Xinhua/Liu Ying)

Amid the disturbing threat of unilateralism and protectionism in the world, China has introduced new opening-up policies since the last CIIE, with the initiatives announced last year generally implemented.

The country launched a sci-tech innovation board at the Shanghai Stock Exchange with a registration system being piloted for the listing of companies, put into effect a management system combining pre-establishment national treatment and the negative list nationwide, and approved a landmark foreign investment law.

It also announced a plan to set up new pilot free trade zones (FTZs) in six provincial-level regions, bringing the total number of the country's pilot FTZs to 18.

"The CIIE exemplifies China's commitment to open its markets, not because of foreign pressure, but because it is the right thing to do for China's economic transformation and enhancing the standard of living of the Chinese people, as well as for the country's integration into the world, reflecting China's dynamically increasing position in the world," said Robert Lawrence Kuhn, a leading U.S. expert on China and chairman of the Kuhn Foundation. 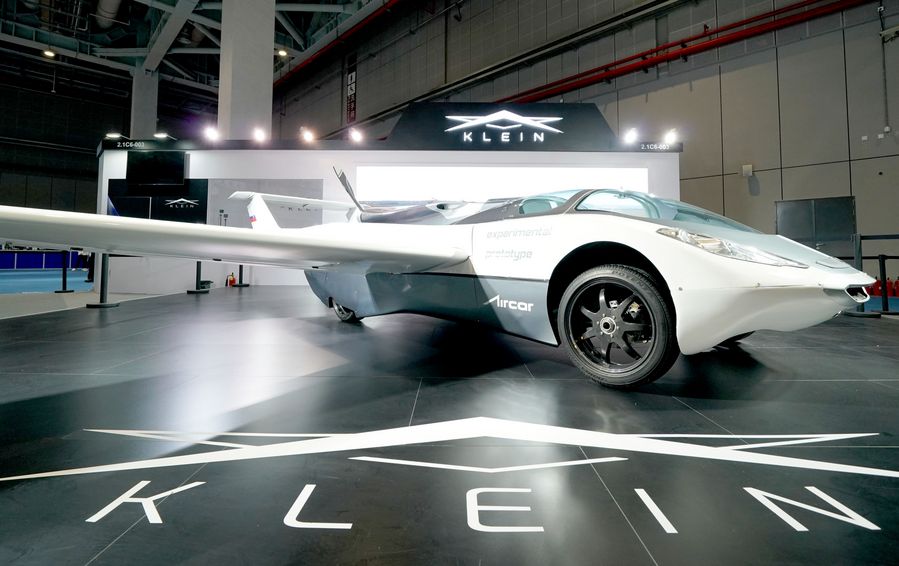 Photo taken on Nov. 5, 2019 shows the experimental prototype of Aircar at the Automobile exhibition area during the second China International Import Expo (CIIE) in Shanghai, east China. The second CIIE kicked off Tuesday at the National Exhibition and Convention Center in Shanghai. (Xinhua/Chen Jianli)

In his Tuesday speech, Xi outlined the country's five measures to promote higher-level opening up -- continuing to open up its market, improve its opening-up structure, optimize the business environment, deepen multilateral and bilateral cooperation, and advance Belt and Road cooperation.

Steps will be taken to further lower tariffs and institutional transaction costs, develop demonstration zones to promote import trade by creative means, and import more high-quality goods and services from around the world, he said.

The country will further ease market access for foreign investment, shorten the negative list and continue to improve the business environment to make it more market-oriented, law-based and internationalized, Xi said.

"What I want to say to you today is that the Chinese market is such a big one that you should all come and see what it has to offer," Xi said.